Over our break I decided to try an experiment with bread. I’ve heard plenty about the idea and practiced it at culinary school.

The process I’m talking about involves, retarding (proofing or rising) bread in the fridge overnight to intensify its flavours.

I used a recipe from Essential Bakery in Seattle, I got the recipe from Amy Glezer’s book: “Artisan Baking.” An easy to follow book with really tasty recipes for serious home bakers, it won the James Beard Foundation Book Award and is worth the buy for the pictures and bread stories alone.

This recipe uses sourdough starter, I’ve been keeping the cafes alive for the winter, with help from others while I was on holiday too!

Make two loaves of bread, bake one the same day. Leave the other one overnight in the fridge to slowly rise and bake the next morning.

The result could shape our bread baking schedule in the café, and also make some really tasty bread.

I baked the breads exactly the same way, except for leaving one overnight and some minor difficulties I encountered baking with home equipment. 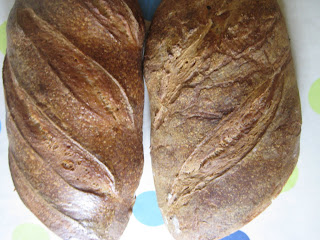 Once the breads were baked there was already a noticeable change in appearance. The bread on the left is the overnight loaf, when the bread was baking it sprung up to attention and took on much deeper caramelization in the crust. The same day bread was beautiful in itself, but was out shined by the competition. I did under-flour the tea towel it was rising on, which caused sticking. So, I had to peel the bread off the towel, and bake it with the rest of its dignity. 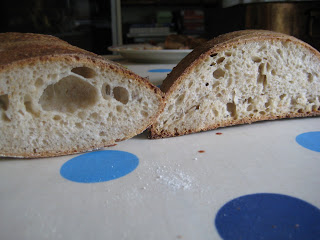 The cross section of the breads is just as telling. The left (overnight) bread has a larger and wetter crumb, so fun to eat!

Our same day bread has a tighter crumb.

Taste Test: the overnight won by far in the blind tasting. It’s just better, and totally worth the effort of waiting over night to bake your bread.

To do this at home:

Leave your bread wrapped in cling film halfway through its rise, before going in the oven. (8-12 hours) The next morning pull your bread into a warm place and let sit for about an hour. Then bake as normal.

The key to a shiny crust is to get lots of steam in your oven during the first half of baking. I brush the crust with water, and leave a bowl of water in the bottom of the oven. You can also block your oven vent with a tea towel to hold the steam in.

One thought on “Overnight versus same day bread”