Sometimes I wonder why I do the things I do.. Opening a new business is slightly stressful… but top that with… One of my main full time employees going back to Poland to get married, have a great time Kasia, (she will be back in two weeks), having a stall at a music and art festival on Sat and Sun.. Then another market on Sunday, our opening party tomorrow… AND its a bank holiday weekend… Crazy..!!

Kasia and Taylor have been baking like mad… trying to stock up for the weekend in store…the cafe has been pretty busy, and I have two new employees that I have been training in for the last week or so.. they have been great… Kasia has been training with Taylor on the bakery side of things, so its all been good…but I am starting to stress out…

The bakery is turning out to be a really cool space… we have turned old doors into display tables and I am trying to use anything and everything that I have to keep the costs down… Richard has some old sinks from jobs in the past, they weren’t very deep, so he came up with the idea of using a shower attachment instead of really expensive kitchen taps with a high neck, I have old lights that I bought 10 years ago, thinking they were going to be used for my first cafe in Kinsale..all of the refrigeration is second hand…the concept for the bakery is to re-use or recycle as much as we can…the tiles were all end of line, or super cheap at B&Q..instead of paying a fortune for brick shaped tiles, the tiler(a friend) cut each 6×6 tile in half to create a brick effect tile… It really exciting and slightly scary to be expanding my business during a recession, but…we needed the space to be able to produce more… it’s a catch 22, you need to spend money to make money, and the bigger your business the bigger the expenses…so I pray that this summer is good to us!

Here are a few photos of the new venture…come down tomorrow, have a drink and a chocolate peanut butter cupcake with caramelized bacon or a mini moon-pie… 🙂 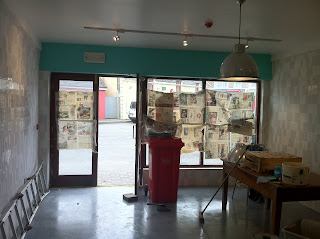 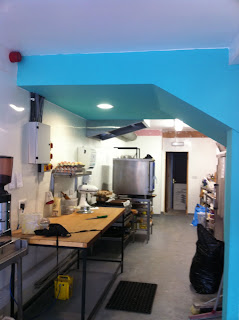 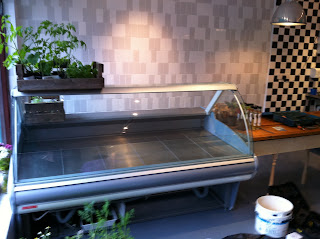 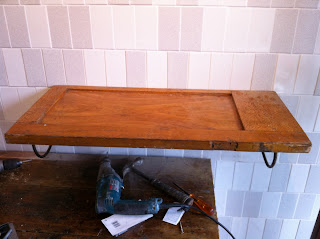 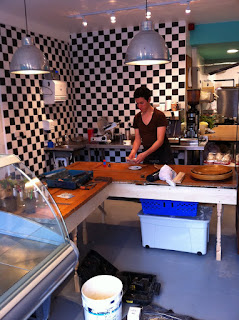